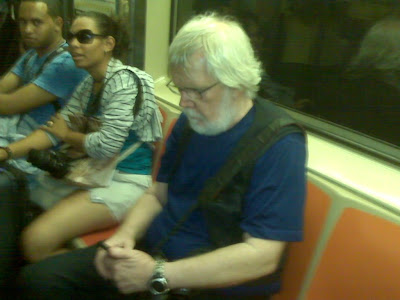 I was on the #1 train yesterday going home from a long day of work. It was already past 8pm and the trains were acting up (many delays on 2/3 and 1. Passengers had to switch at least 3 times!). In any event I was finally settled on the #1 minding my own business when all of a sudden a flash goes off. I looked up and across from me this creepy guy has taken a picture of me with his blackberry. I had noticed earlier that he was looking at his blackberry but I thought he was reading it. I asked him, “what was he taking a picture of?” He responded nervously nothing and then when I repeated the question, he stated that the flash went off accidentally (yeah, it accidentally busted you!). I kept repeating, “what were you taking a picture of?” I told him I did not believe him and asked him to show me the picture. He started fiddling with the camera the blackberry and then claimed he couldn’t find it. I told him that was convenient. This conversation was taking place loud enough for other riders to hear and they were paying attention. A gentleman sitting next to the creep got up took the creep’s picture with his phone and then the gentleman sat next to me. This gentleman told me that he had noticed the creep taking pictures of me earlier. He gave me his card and told me to email him and he would send me the creep’s photo. What a hero!

The creep then became more nervous and showed me the picture on his blackberry. It was picture of my leg and feet (WEIRDO!!!). I had on a short dress and flip flops. I knew he couldn’t see anything else because my legs were together. (I know I shouldn’t have to say that part but every time I tell the story I feel compelled to explain that I wasn’t showing any underwear or something to cause this). I made the creep delete the picture. I asked him were there any other pictures. He then showed me a blurred picture of my leg. My hero had gotten off at this point. The creep started talking to me and said, “You see, I deleted the picture.” He repeated that a few times. I told him to stop talking to me. He walked away and stood a few feet. I was nervous about getting off my stop but I didn’t want to stay on the train anymore. So I got off. I will be taking another train for the next few weeks. I suspected the police could not do anything but I tried anyway. I spoke to the first police officer I saw. He informed me that no crime was committed. That it was not illegal to take a picture of someone on the subway and unfortunately, the creep can do whatever he wants with whatever other pictures he has on his blackberry. My hero emailed me the photo last night and tipped me about this website. It is good to know that for every creep out there, there are also great men too.

Lesson for the day: Ladies, pay attention. When you think they are reading their blackberries, they may be taking a photo of you.