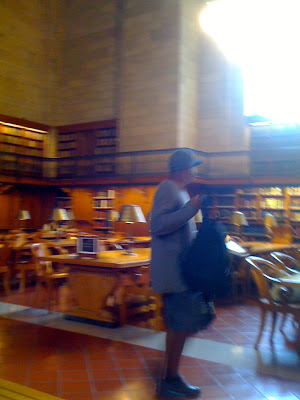 Earlier this afternoon, I was working on my laptop at the Steven A. Schwarzman branch of the New York Public Library, when I noticed a man, seated one desk away across from me, staring at me. I tried to ignore it at first, but he kept staring even when I stared right back at him to let him know I was aware of what he was doing. I noticed he had one hand on the desk and the other one under the desk, and suspected he was up to mischief. However, since I couldn’t really see, I did not say anything. I did not want to change seats because I already switched seats earlier (another story). Besides, I did not want to be intimidated into moving. At some point, the guy got up from his seat and shifted some chairs around so that my line of vision to his legs were blocked. Moments later, he got up and moved the chairs around again to clear my line of vision and I knew something was up (no pun intended). A few minutes later, he was back in his chair, staring at me and masturbating.

I took out my iPhone to photograph him and he quickly shielded his face with his hand. He then got up to leave and all I got was a picture of him walking away, his face turned to the side. I followed him, knowing he would encounter a security check point. He walked through–the security guard seemed to recognize him and they exchanged goodbyes. I told the security guard what happened, who shook his head and said, “This is the third time someone has reported this about him.” WTF? I looked at him incredulously and asked why nothing was being done, why he didn’t go after the guy. He said he could not leave his station and shrugged. I insisted that he contacted some one through his radio–the man would have to go through another security checkpoint–which he finally did, but by that time, the guy–as I later learned–had already left the building.

I got my things and was escorted to the library’s security office to report the incident. Two men in suits came to speak to me. As I was explaining what happened, one of them began to defend the guard for not leaving his station and said that the perpetrator had likely left the building. Meanwhile, the other suit whisked away my phone to another office without asking me. I insisted on knowing what was going on and followed the man who took my phone; he had plugged it into his computer at his desk. I politely reminded him that he had not asked for my permission and he returned my phone without, I think, downloading any files. It was not that I did not want to share the photo but that no one was telling me what was going on. One of them instructs a guard to begin filing a report. “For sexual harassment?” the guard asks. “No, for public lewdness.”

The suits then asked if I wanted to talk to the police and press charges, and since I felt like I wasn’t sure what the library was going to do about the incident, I said yes. While waiting, one of the suits asks me to look at surveillance images of a library exit to identify the man (again, it was his profile image) and “as best as I could tell,” it was him. 35 minutes later, the police came. After hearing my story, they explained that there was nothing they could do; even if they had caught him, no charges could be pressed since he had not “indecently exposed” himself. In the presence of the police officers, one of the suits told me that he had seen the perp around before, recognized him and will “ban” him from the library the next time he comes by. One of the police officers then walked me to a subway stop and advised me on how to respond should I ever see the man at the library again.

Years ago as a teenager, I had been harassed and was paralyzed with shock, fear and self-doubt, unable to respond. I’m glad that I had the presence of mind to react this time and not be intimidated, but oh, I am so angry with that guy for being so demeaning and for stealing my precious writing time. What upsets me more is that I had to insist before the security staff took any action and, worse, the security staff seem to have had previous reports about this man but never ever followed up because who knows why. Is it really too much to ask to be taken seriously when reporting an incident of sexual harassment?

2 responses to “"This is the third time someone has reported this about him." WTF?”