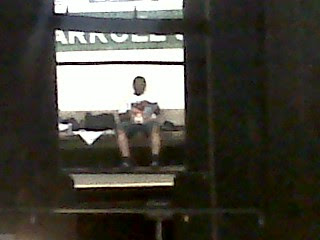 This is (a sadly very blurry) photo of a subway masturbator I took on friday night at the Carroll street station. My friend (visiting from boston) and I were heading into the city to meet up with a group for drinks and dancing. Being a friday evening I knew the train would be a while so we sat down on the bench. Across the platform this man was also lounging on a bench. He had made himself comfortable- his bags were strewn around the bench and he was slouched across two seats. Upon seeing us he yelled across the platform “hello ladies” to which I gave him a nod as it had been relatively polite. As it turns out he had bothered my friend as she left the station earlier that evening- asking her where she was going, could he come along etc.

It took me about a minute to even find the camera setting and the pictures aren’t good, but I wanted to freak him out. I then loudly told my friend about hollaback and how useful these pictures will be to the cops when I contact them. Seeing that my pictures were so bad she pulled out her own camera, snapped a few which she intends to touch up so they are more visible.

Thinking that was over, we started talking about street harassment. How common it was in the city. Her own terrifying experiences with men in cars. Then we heard some muttering and looked across the platform to find him at it again! Looking straight at us and mumbling “I like you both… Boobs… Bubble” (couldn’t really understand him). Again we yell at him- there are more people in the station now so I am hoping we can embarrass him. No such luck. We take out our cameras. He covers himself again. Still for the next 30 minutes that we wait for the train he keeps talking to us “I love you… Bubble.. Etc”. Now the normal thing would have been to move but I imagined that as backing down so we stayed, I yelled at him a few times, pretended to have reception and called the cops etc.

The train finally comes, we get to the city and I immediately try and report him. Of course no one is picking up and I keep mysteriously being redirected. My friend is on her phone trying to find the group we were meant to hang out with. It turns out that they had had to leave, as one girl had been roofied (she was thankfully with observant friends who took care of her).