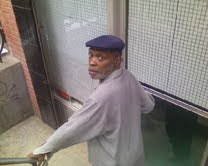 This is about two incidents, the photo goes with the second one.

About two weeks ago, I experienced one of the worst incidents of street harassment in my entire 14 years of living in New York City, in which five men surrounded me on a sidewalk in the middle of the afternoon and proceeded to verbally harass me while not allowing me to continue down the sidewalk. There was no one else around, and I was truly terrified, because I was so outnumbered, and there was nothing I could have done to defend myself against so many if they had chosen to do worse than verbally harass. After a minute (that felt like an hour) I managed to dart around them and get away. Once I was far enough away that I felt a bit safer, I reached for my phone to take their photo (yes, I was scared, but I was also so angry at being treated like that!) and I realized I didn’t have my phone with me. I was so, so, disappointed.

I was still trembling by the time I got back to work, but I called the business these men were employees of to complain. The managers I spoke with surprisingly took the incident very seriously, stating that they did not accept this type of behavior from their employees, and would speak with the men involved.

But still, as I’ve processed the incident since then, the biggest regret I’ve had is that I didn’t have my phone with me to take a picture of them. I’m glad that they probably got in trouble with their bosses, but the immediate impact of having their victim take a photo of them – I’ve done it before, and it really does have an affect. The bottom line is, when you do this, you’re taking the power back from the harasser. And that’s what street harassment is really about – the power. Holla-ing back with my camera phone is the only thing I’ve done in response to street harassment that actually made me feel less like a victim, and more like a human being.

Well, this morning I witnessed an incident of street harassment directed at another woman. She was walking a few feet in front of me, and a man was walking in the opposite direction (towards us). The sidewalks on this block are very narrow, and under the best of circumstances, it’s difficult for to people to pass each other. When the woman in front of me got to the point where she had to squeeze by the man, he stopped, staring really hard at her, and turned his body into her as she passed. There was less than an inch of space between them, and he was doing his best to make it even smaller. She ignored him and kept going, but I guess he didn’t like that, because then he called out to her “I am going to bite you.” I was so grossed out, but also scared he would turn his attention to me as I passed. So, I took advantage of the fact that he was still staring at her as she walked away to get past him myself. As soon as I was past him, I grabbed my phone out of my purse. After a few moments of fumbling to get to the camera feature, I turned back, and saw he was going down a flight of stairs. With my camera in position, I realized I would only get the back of his head, so I said “Hey!” He turned, and I snapped a perfect photo.

He did not look happy. But me? I felt … empowered.