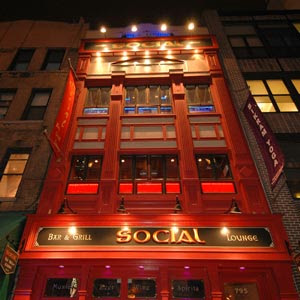 A man attacked and possibly raped a pediatric nurse in a bathroom stall in the midtown bar Social, police said. The perp fractured the 30-year-old woman’s skull, and broke her eye socket and nose after she reportedly refused to dance with him in the three-story Eighth Avenue bar and lounge.

According to the Times, the attack occurred at around 2:30 this morning when the Connecticut woman declined to dance with the perp. After “she rebuffed his advances,” the attacker followed the woman into the ladies bathroom, kicked open a bathroom stall door and assaulted her. Law enforcement sources believe she might have been raped because her pants were partially off when she was found.

One of the nurse’s girlfriends discovered the victim unconscious in the bathroom stall. She was taken to New York-Presbyterian/Weill Cornell Medical Center, where according to ABC, she underwent surgery. Police are trying to find video of the man entering or leaving the bar.