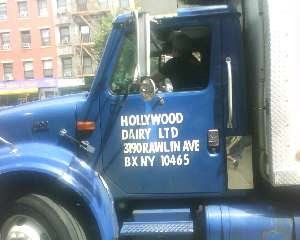 On July 31st I had a dispute on the corner of E 7th St. and 1st Ave. with two truck drivers of Hollywood Dairy LTD. The location of this business is 3190 Rawlins Ave., Bronx, NY 10465. The New York commercial license plate of their truck read: 31228 JT. There were three drivers, two harassed me. I have photos of the truck and the aggressors. I am a woman in my twenties.

I was walking by and one of the drivers hissed at me (familiar to any woman, never appropriate to do this to a stranger, a woman, but there was certainly nothing palliative about his way of hailing this ugly sound at me, his sound effect was in no way mild or naive; it was sharp, accustomed, unmistakably aggressive and disrespectful). I challenged the person who thus disrespected me, I wanted an apology, and he and one of the other men set in on me, insulting and demeaning me in every possible way (mocking my intelligence, sanity, appearance, and investment in the situation. Any bigot surprised to be called out will try to downplay his accuser).

I called the police and was waiting for them to arrive, so I was next to these men without an ally for about twenty minutes, trying to reason, losing my temper, and being ludicrously, sadistically baited. I want these men held accountable. I want Hollywood Dairy held accountable for putting such nuisances on the street to interfere with and to denigrate women. The incident was very upsetting to me. I do not treat people this way, I do not see people in the dehumanizing, small way that could only have allowed them to treat me as they did. Ignorance is unfortunate, but it cannot be an excuse for bigotry and demeaning aggression.

I have contacted various news channels, as well as the police again, and I have left messages for and mailed a long letter to the manager(s) of Hollywood Dairy. Please hold these people responsible (let there be an affecting consequence) for their bigoted behavior that caused me great stress, which I did not deserve. No woman should be taken out of her peace on her own streets.